Let’s start with the general appearance of this interesting plant, and after that we’ll look a bit closer at some fascinating details. The first impression is that we look at a Colchicum, and that is not so strange, because both Colchicum and Androcymbium belong to the Colchicaceae. The leaf rosettes of A.rechingeri-plants look like Colchicum pusillum Sieber, found in Eastern - Crete and Karpathos and are sometimes mistaken with these; that is, until they flower. Androcymbium rechingeri is clearly related to the south-and east-Mediterranean species of Androcymbium (like A.gramineum (= A.europaeum) and A.palaestinum).
​
The stems of A.rechingeri are underground, with indistinguishable internodes.The leaves are lanceolate, wide at the base and acute at the apex, up to 15 cm long and  3 cm wide, dark green and shiny. Actually, the outermost leaves are really leaves, the ones in the center of the rosette are, and I quote the Androcymbium- specialists J.Pedrola-Montfort et al :”leaves expansions detached from the stem at different sites, giving rise to nomophylls and hypsophylls with flowers on the central area of the lamina”. I find it easier to abbreviate this sense and call them “extended bracts” (and, actually, that is not really my idea but Hegi’s). Now, if you take a look at the drawing, you’ll see that the flowers look like as ........ 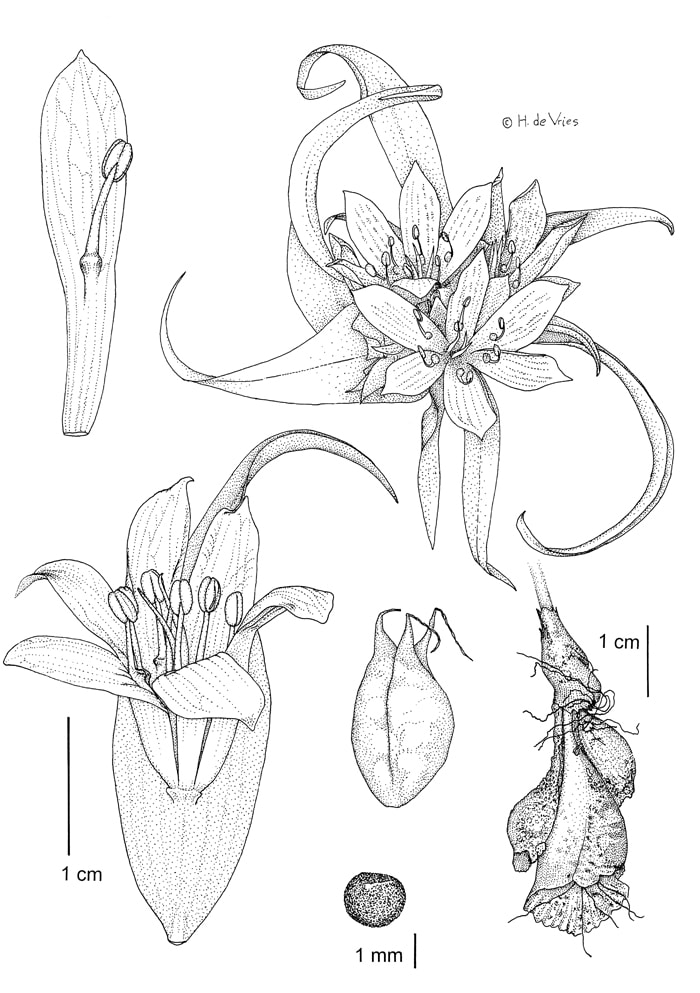 But that is not all ! The base of the stamen is united with the tepal, so that it seems that the stamen is sitting in the middle of the perianth segment. At the base of the stamen is a nectary. This should indicate that Androcymbium needs insects for pollination, but this seems to me a little confusing because it flowers around  December. The nectaries are quite active: there is always a drop of a very sticky fluid (probably sugar-water) or, a little later, a clump of sand glued on the nectaries.

So far for the leaves, now let’s dig somewhat deeper. And that’s underground. Androcymbium plants have a tunicated corm, similar in appearance to the familiar tulip bulbs (but in Androcymbium they are not bulbs but corms !!!). A corm is a short, swollen underground stem of a plant that stores food reserves to enable the plant to survive adverse conditions, in the case of A.rechingeri summer drought and heat (estivation). A corm is typically surrounded by protective skins called tunics. These tunics consist of the old dead skin and in healthy plants the corm for next year is larger than the old tunic from last year, so after flowering, when a new larger corm is formed inside the old skin, this old tunic is pushed upwards where it meets the tunics of former years, pushing them up, the oldest and smallest tunic on top, the latest tunic at the bottom (see drawing).
​
There is always only one flower on every “leave”. The pedicel of the flowers is very short, less than two millimeter. Because there is no apparent difference between the 3 petals and 3 sepals, the perianth segments are called tepals, and there are 6 of these tepals. The flowers can be up to 3 cm in diameter and in well developed flowers the tepals can be as long as 20 mm, with a width of 4 mm. Although the flowers look like they are campanulate, the perianth segments are divided down to their base without fusing into a tube. The flowers with their flat lamina are white and generally more or less  striped with red-purper lines and dots at the base of the tepals. The anthers are yellow with a tiny black line on the back, the connective.
The fruit is an ovoid capsule, with a papery skin. The seeds are more or less round with a grey-brown, rough testa, which is minutely warty.
The only known places where it can be found is in two small spots on the sea-cliffs or sandy coasts of West Crete. Androcymbium usually grows in colonies
The most beautiful photograph of Androcymbium rechingeri I found at:
http://www.west-crete.com/flowers/androcymbium_rechingeri.htm

Originally, Linnaeus in his Species Plantarum included the genus Androcymbium in the genus Melanthium L. In 1808 Willdenow splitted this genus so that those species  found in America would remain in this genus and those that are found in Africa (and, later, in the Mediterranean) would be assigned to the newly formed genus Androcymbium. Androcymbium rechingeri was not described until 1967 !!! (Greuter, W.(1967); Contributiones Floristicae Austro-Aegaeae; Candollea 22(2):233-253)